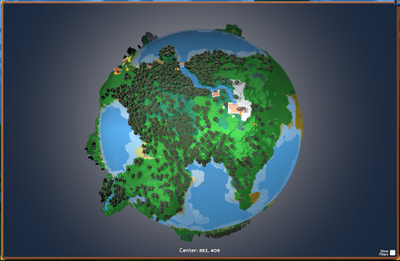 The Map can be rotated to show the entire planet

Press M to open a Map of the World. Layers showing population, pollution, and environmental data can be viewed in the Map window.

Clicking and dragging on the minimap will rotate it.

The dropdown menus on the right side of the screen contain options for showing what displays on the minimap, selecting world layer heatmaps, and editing and placing world markers.

Selecting the checkbox next to a world layer will highlight the map with a heatmap that shows the layer's levels across the map. This scale can indicate species density or capacity, or other statistics such as world rainfall or player activity.

After selecting a world layer in the drop-down menu, you can click the Show In World checkbox to see that layer on the ground in regular view.

Checking any of the following checkboxes will toggle the view of the related object(s) on the map.